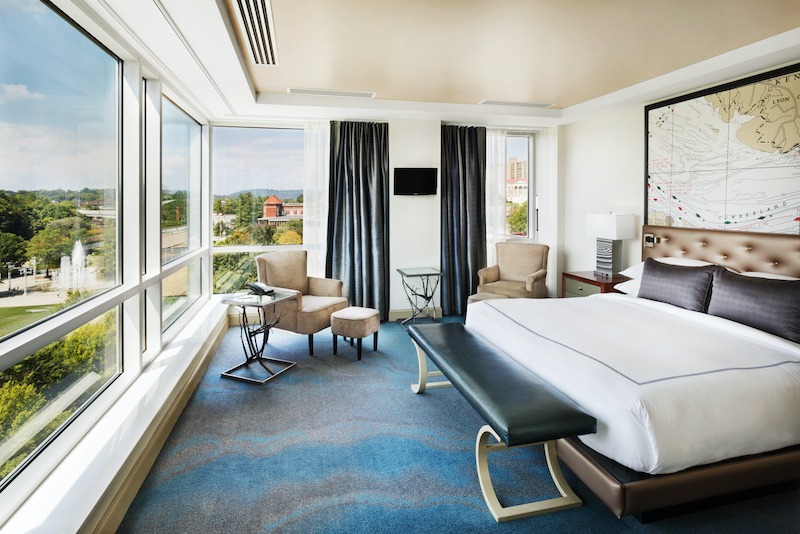 THE TENNESSEAN, a personal luxury hotel that opened in the spring of 2017, relied on our extensive travel and tourism experience to make a splash with their grand opening.

Knoxville is more than college football and mountains—it’s a rising hot spot for luxury travel.

Develop messaging that tells the unique story behind the hotel and its innkeeper, a native Knoxvillian looking to bring a one-of-a-kind level of luxury to his hometown.

We worked with the hotel team and the Knoxville Visitor’s Bureau to determine top drive markets to the Knoxville area. This data was consulted as we developed a targeted PR strategy to reach national media by spotlighting the luxurious and unique aspects of the hotel. Highlighting architectural details like the tuxedo wrapping around the hotel and design features that reflect the Tennessee River, the theme of the property, we coordinated media stays for some of the nation’s top travel writers in exchange for editorial features, social media posts and blogs about their experience staying at THE TENNESSEAN.

As a result of our efforts, the hotel has topped lists such as the Forbes Travel Guide Hot Hotels and won  Southern Living’s 2018 South’s Best Hotel. Within the first six months of the hotel’s opening, THE TENNESSEAN was featured in local and regional outlets including the Knoxville News Sentinel and Birmingham Magazine, as well as a variety of top-tier media outlets such as Condé Nast Traveler, HGTV.com, TravelChannel.com and CNN Travel. Garden & Gun has also featured the property multiple times and looks to the hotel team as a resource for future stories as a result of our relationship building efforts.

In under four years, we secured more than 556 million media impressions for the hotel.