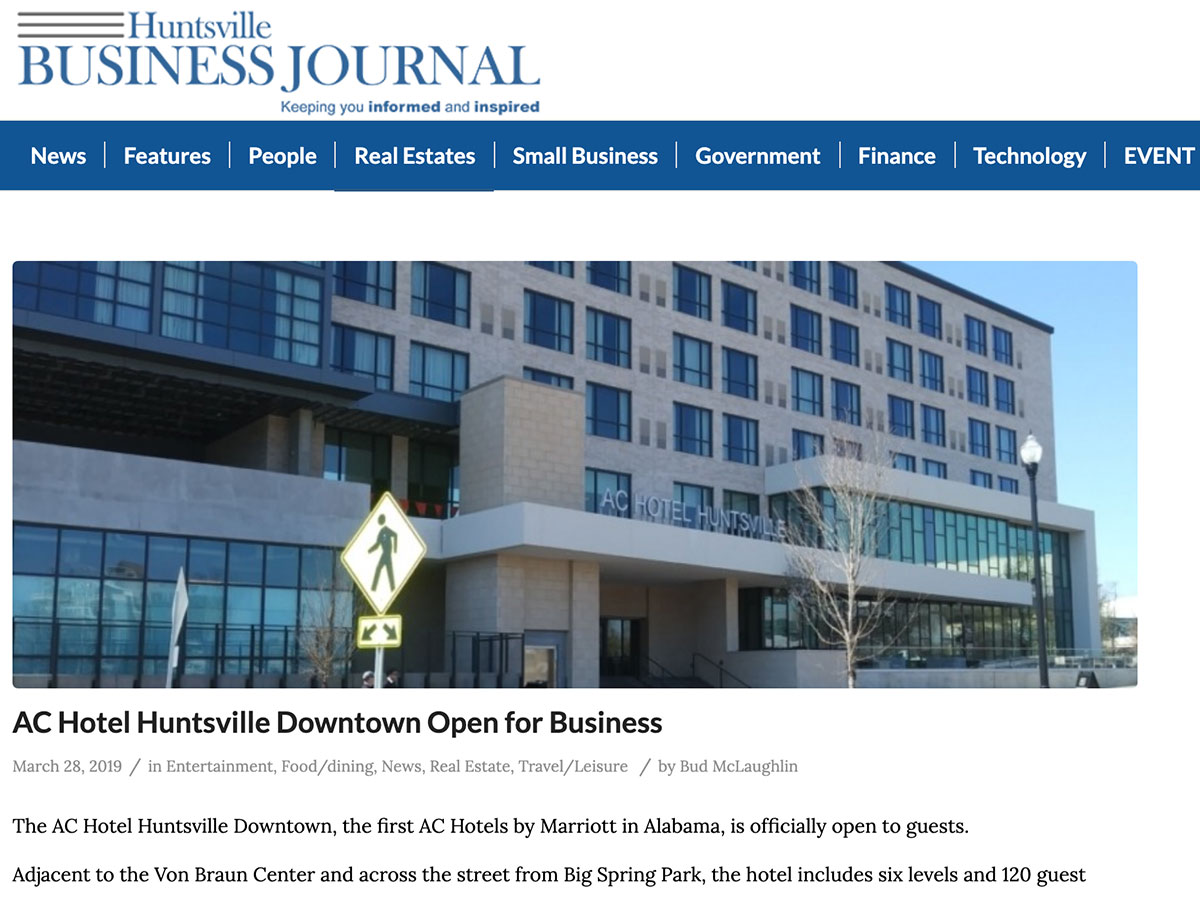 Yedla Management Company approached REED Public Relations to help promote their newest hotel, the AC Hotel Huntsville Downtown. This is the first AC Hotels by Marriott® to open in Alabama. Not only was this an excellent opportunity for Yedla Management, but it was a huge announcement for the city of Huntsville. AC Hotel Huntsville Downtown is the first tenant for CityCentre at Big Spring, a highly anticipated $100 million, mixed-use development in Huntsville’s rejuvenated urban core.

With media relations at the forefront of the plan, REED created an editorial calendar with ideas for pitching local, regional and national media to generate buzz for the new hotel. In addition to a press release about the hotel opening, we crafted a release announcing the hotel’s signature cocktail, The Starry Night—a drink that plays on Van Gogh’s famous painting to underscore the integral role Huntsville has played in America’s space program as well as its burgeoning arts scene.

Knowing the signature cocktail was an essential standout item for the hotel, our team developed a media mailer that was sent to top national travel writers to introduce them to the AC Hotel in Huntsville. The package included a constellation cocktail glass, coasters with Van Gogh’s Starry Night painting, lavender simple syrup used in the signature cocktail and a sachet of lavender which is placed on the pillow of each hotel guest bed. Our team received great feedback from these travel writers who loved the gift.

Additionally, our team researched top travel influencers within Huntsville’s key driver markets to pitch for media stays at the hotel. These markets included Birmingham, Nashville, Chattanooga and more. This was another way to position the AC Hotel Huntsville Downtown as an ideal place for Millennials traveling to Huntsville for business or pleasure.

To celebrate the hotel’s grand opening, our team helped plan and execute a ribbon-cutting ceremony with Huntsville’s elected officials and civic leaders. The event filled the hotel lobby and received significant exposure through broadcast, print and online media coverage.

As a result of media outreach and the ribbon-cutting event, our team secured 36 media placements for the AC Hotel Huntsville Downtown, totaling 4,104,674 impressions. Additionally, five influencers stayed at the hotel and featured content which reached 334,327 followers.