Our boss is better than your boss.

Lauren sat down with Bizwomen to talk millennials, creating a collaborative work space and the launch of our pilot program for Be The Good. 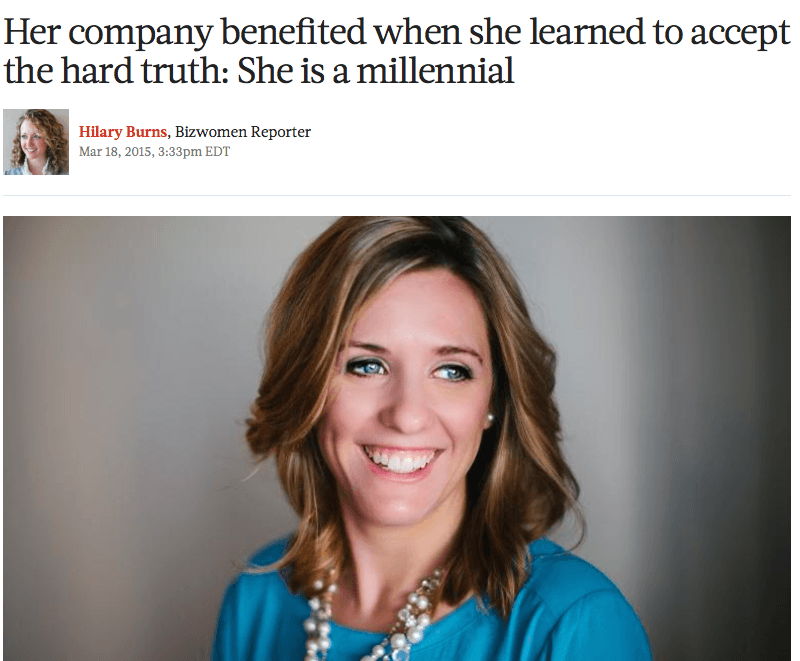 Lauren Reed was having a generational identity crisis.

She was born in 1982, which marks the beginning of the millennial generation (according to most sources), but she didn’t feel like a millennial — especially when she went to work for baby boomers after college.

“Being born in 1982, we are millennials, but we lack so many qualities and experiences this generation is known for,” Reed said in an interview with Bizwomen. “I didn’t even have Facebook until after college. I used to deny, deny, deny that I was a millennial. For a while there it had this negative connotation.”

But in the last year, Reed has come to embrace her millennial label, as she wrote in the Nashville Business Journal (a Bizwomen sister publication). And adopting the mindset and values associated with the millennial generation has helped her create an appealing culture for her PR and marketing agency, Reed Public Relations.

She founded the company in 2012, after working for the full-service agency Peritus. Reed says her Nashville-based company was profitable the first month it was in business, and she now has national clients such as Ford Motor Company, O’Charley’s and Paramore, a national digital agency.

And all of her employees are millennials.

So she’s had to adjust her business plan and company culture accordingly. Here are three ways Reed has made her agency millennial-friendly, for the benefit of her team and her bottom line:

The company recently moved into a new office space, and Reed wanted to build private offices — a baby boomer-esque move.

But after talking with her five-person team, Reed realized they wanted an open, collaborative environment. So now the account team is all in one open space, and there are meeting rooms available for privacy or phone calls.

In the background, the company’s core values — “give back,” “fresh approach” and “action-oriented,” among them — are painted on a wall. Reed said the team members all played a part in coming up with those values. And if they get an email from a client praising them for something they did, they tie it back to a core value.

It’s all about the team mentality, even when it comes to where they sit.

This was the hardest part for Reed. She wasn’t used to giving or receiving constant feedback. The baby boomers she worked for trusted her to figure things out on her own. They gave her a Blackberry, a list of clients and told her to go figure it out. Frequent communication was not a priority.

“I have always been very independent, and I don’t require a lot of external validation,” Reed said. “I came from a sink-or-swim environment.”

Millennials, on the other hand, prefer frequent feedback — whether positive or negative. So Reed adjusted. The team now has daily huddles for 10 or 15 minutes to run through top priorities of the day. She holds individual meetings with each employee every two weeks to talk about goals and growth. And then there are 90-day and six-month reviews.

“This all feels like overkill to me, but it’s what this team needs to keep moving forward,” Reed said. “It’s not that they need pats on the back — they want negative feedback, too. We rarely have communication issues because we are always over-communicating.”

Reed had her team write down personal and career goals on a recent company retreat. No one put down money as a top priority.

“They were focused on new skills, traveling to new places and having new experiences,” Reed said. “That’s a shift from my previous job to now.”

And it made Reed think. She started brainstorming with her team about why they came to work each day.

“Yes, we’re good at PR and we enjoy it, but we all felt that there must be a bigger purpose,” Reed said. “What can we as an agency do to make that lasting impact? We’re just a handful of people working in a small office in Nashville. How can we work for something bigger than ourselves?”

Eventually (after an account manager asked Reed what business she would start if money were no object), Reed decided to provide travel scholarships or financial assistance to send people around the world to do volunteer or mission work. They named the initiative “Be The Good.” It’s in a pilot phase this year, and Reed said it will officially launch in 2016.

The purpose of donating revenue to a philanthropic cause is threefold for Reed: First, to recruit the best millennial talent, since millennials expect a social good element in business. Second, to set an example for clients, whom they encourage to create cause-related programs. And third, to give the team something bigger to work toward.

“This is an area that I am deeply passionate about. Mission work changes you,” Reed said. “It makes you a better business owner, team member, spouse, parent, friend.”